I had the honor of seeing George Carlin in one of his last performances at the Orleans Hotel in Las Vegas on June 14th.

No one in the audience could have guessed that he would be dead in a week. From the first minute on stage he had people in the audience laughing so hard they could hardly breathe. He even tested out some new material that was going into his 15th HBO special. It will be one of my greatest regrets that I didn’t video tape it.

Even if we had the talent I doubt that many of us would have the strength and drive at the age of 71 to still be writing new material and touring around the country to sell out theaters.

I know George was a devout atheist but just in case he was wrong I know that along with the other godfathers of modern comedy (Lenny Bruce and Richard Pryor) he’s making God laugh so hard the sacramental wine is coming out his nose. 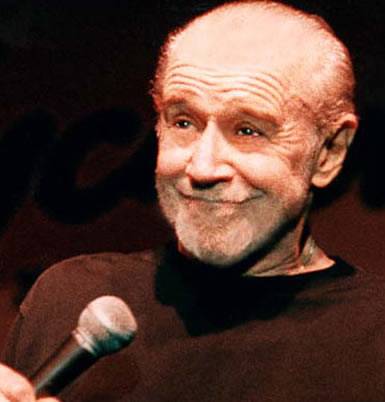 George Carlin Quote On The Duty Of Being A Comedian

“I think it’s the duty of the comedian to find out where the line is drawn and cross it deliberately.”

He was THE advocate of the first amendment, over a course of nearly 50 years, this man never compromised his beliefs, never gave in, never gave a rats ass about whether or not he offended someone, and he never stopped reminding us not to listen to bullshit.

The last person to ever be arrested for “obscenity” was a comedian by the name of Lenny Bruce, in 1961 at a show in San Francisco, as he was being arrested a cop asked a kid in the crowd for some ID, the kid refused, saying he had the constitutional right not to give any, he was promptly arrested and put in the same squad car as Lenny Bruce. That kid was a young George Carlin.

This tribute to Mr. Carlin wouldn’t be complete without Georges “Seven Words You Can Never Say on Television”